View cart “SNOWY LANDSCAPE AND PLEASURE BOATS (Utagawa Kunitora)” has been added to your cart.

Fine woodblock print of the uchiwa-e (団扇絵) type depicting a splendid view of Tokyo Bay (東京湾) and Mount Fuji (富士山) from the perspective of Atagoyama (愛宕山). Very interesting is the presence, on the right side of the work, of a western-style tower which was built in the middle of the Meiji era (明治時代) and whose observatory was open to visitors who, by paying a small fee, could enjoy a magnificent view of both the bay and the city. That particular location was so clear of obstacles that, in fact, in the following years it would have been chosen for the positioning of the transmission antennas of the Japan’s national broadcasting organization.

The print, intended for the decoration of a bamboo uchiwa (団扇) fan, was made around 1900 by the artist Nabeta Gyokuei (鍋田玉英), a pupil of the famous Toyohara Chikanobu (豊原周延) considered a master of fuzokuga (風俗画) genre painting and also appreciated for his fans, which in June 1892 were celebrated in the important Japanese newspaper Yomiuri Shimbun (読売新聞).

The woodblock print on Japanese washi paper (和紙), despite the right signs of aging, is in good condition. 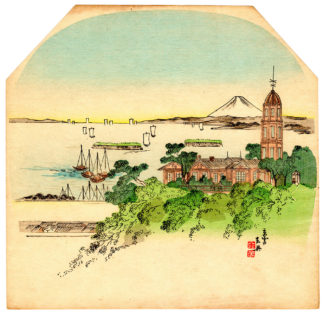